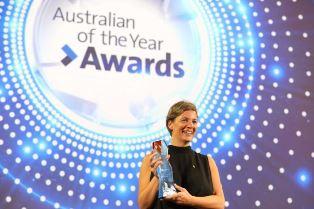 Professor Michelle Simmons is the most recently crowned Australian of the Year. A true testament to quantum physics, science more broadly, women, and Australia - we take a quick look at Simmons' work, and the achievements that led to her becoming the recipient of this most prestigious award.

The British born quantum physicist moved to Australia in 1999 and has never looked back. She cites the curious and driven attitude of scientists here and their willingness to collaborate as some of the perks of conducting research down under.

Her long term goal is to invent the quantum computer, and progress is looking very promising so far. In 2012 Michelle and her team worked to create the world's first single atom transistor, an astounding 4 atoms wide. The transistor is a vital step for reading and and controlling 'qubits', the unit of measurement in all things quantum. Currently based at UNSW, Michelle founded Silicon Quantum Computing in 2017, the first ever quantum computing company on Australian shores.

On a recent interview on RN Breakfast following the AoTY ceremony last Thursday, Simmons explained to host Fran Kelly some of the finer points in her complex field of expertise. Where classical computing works by following one item of code after another, quantum computing works in parallels. Wherever there is a large quantity of data, potentially with many variables, a quantum computer could translate it into real world data instantaneously. This would rapidly increase efficiency in an array of systems used daily on a global scale. Think weather prediction, drug study and design, predicting traffic and cutting fuel costs, to name a few.

On a personal level, Simmons is a believer in perseverance and "doing things that are hard, as they are the most rewarding". She intends to use her platform as Australian of the Year 2018 to encourage young Australians to interrogate the world around them and create new technologies. She also wishes to promote women in quantum physics, with a mere 5% of the industry being female.

Purdue University. (2012). One and done: Single-atom transistor is end of Moore's Law; may be beginning of quantum computing. [online] Available at: http://www.purdue.edu/newsroom/research/2012/120219KlimeckAtom.html [Accessed 29 Jan. 2018].