Home NewsStaying up to date with mining automation

Staying up to date with mining automation 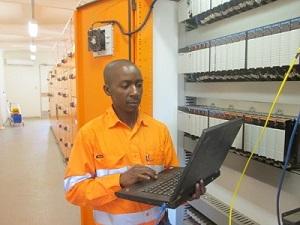 Endeavour Mining’s Karma mine in Burkina Faso, West Africa, is an open-pit mine that produces an estimated 190,000 ounces of gold annually. The mine started construction operations in April 2016, and is expected to run over a 10-year mine life.

The Former CEO of Endeavour, Neil Woodyer, before the operation began, said:

“Once in production, it will become our flagship low-cost mine and will rank amongst West Africa’s top tier cash generating mines.”

Simbarashe Mburuma has worked in the electrical and instrumentation field in mining for the past 10 years. Working in and around Africa, he has taken his expertise to Zambia, the Democratic Republic of Congo, Botswana, South Africa and Ivory Coast.

Mburuma currently works for the Endeavour Mining Construction Team in Burkina Faso, working as an Electrical & Instrumentation supervisor. His day to day tasks consist of installing Electrical and Instrumentation systems in process plants and working with the automation team and he will continue to do so until the project concludes.

This is one of the reasons that contributed to his decision to embark on the Advanced Diploma of Industrial Automation, offered by the Engineering Institute of Technology (EIT).

But it was his opinion of automation generally which ultimately motivated him to register on the course: “Industrial Automation is going to change the shape and control system architecture in most industries, be it mining or manufacturing.” There is no doubt that automating the mining industry will ensure that mines are less labor intensive, safer and increasingly efficient. Mburuma goes on to say that mining process control is moving so fast that a practitioner has to “keep up with the current trends.”

However, he did clarify that as a staff member of a mine which is constantly striving to achieve its goals, the efficiency and work ethic of the individual is also important.

In this regard, the course introduced Mburuma to a very useful technique during his course; he learned how to implement the Pomodoro Time Management technique; a benefit in both his studies and work.

The Pomodoro Technique is a time-utilization technique that involves studying or working in short, but effective bursts of twenty five minutes each. It is followed by a short break, and then a return to work. Mburuma used it to balance his time between his job and his studies.

He found other aspects of the course valuable too, about which he had this to say, “The program is so rich with educational material used in a day to day environment,”  Specifically he mentioned applying the following to his daily operations, “Control loops tunning , electric motor protection and maintenance, industrial communications, PLCs and SCADA technologies - only to name a few.”

Mburuma is now looking forward to pursuing EIT’s Master of Industrial Automation. He commented that the flexibility of the live, online learning approach and the rich course material has enticed him to keep going, “I am empowered by this advanced diploma, I am not stopping here,” he said.

All of us at EIT congratulate Simbarashe on gaining this qualification and we look forward to his return.