On the 18th October the Engineering Institute of Technology (EIT) hosted their 2018 African Graduation Gala, in South Africa.

Almost 60 graduates attended; having completed either a Master of Engineering degree or an Advanced Diploma, and in a couple of instances, a Professional Certificate course.

Despite the tyranny of distance, the EIT graduates who were able to attend hailed from ten African nations: Chad, Ethiopia, Uganda, Tanzania, Botswana, Namibia, Zambia, Zimbabwe, Angola and South Africa. The live, online platform of learning reaches EIT students in their homelands around Africa (and indeed the world). The graduates’ discipline, persistence and determination were applauded; the vast majority of them have studied while working full time.

The 2018 graduates were addressed by the CEO of the South African Council of Engineering (ECSA), Mr Sipho Madonsela and Mr Johan Maartens, the CEO of the Society for Automation, Instrumentation, Measurement and Control (SAIMC).

Both gentlemen expressed their support for an education which contributes to the betterment of the learners and to the industries in which they work. They also exhorted the graduates to continue to learn and to remain abreast of ever-changing technologies, in an age marked by the Fourth Industrial Revolution.

Addressing the graduates at the ceremony, CEO of ECSA, Mr Madonsela said:

“You are party to a revolution whether by commission or omission which is enhancing engineering didactics on the concept of technology. Not only have you been equipped with the means to transform the natural world, you yourselves have been through a process that is transforming the deployment of technology in engineering education.” 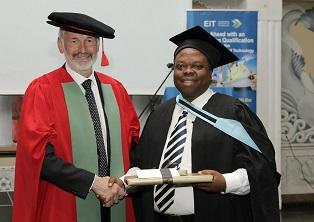 Other speakers included some of EIT’s most celebrated and dedicated instructors - Terry Cousins and Tom Neilings. They noted that technology has grown in leaps and bounds since the advent of the internet.

The Dean of Engineering at EIT, Dr Steve Mackay, honoured some of the college’s most dedicated students and urged them all to maintain their integrity; even when it required them to choose the more difficult path.

The Graduate of the Year, Johannes Kapeuasha, joined the proceedings via webcam from Namibia; he spoke admiringly about how EIT had contributed to his promotion from security guard to industrial security technician.

One of the runners-up is a future female engineering superstar, Jo-Ann Hogan. She commented that there were times during her course when she thought she would not finish; her excitement for what the future holds was plain. 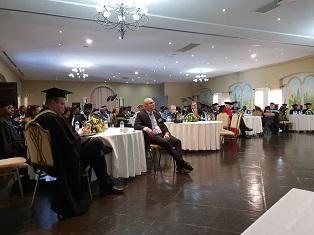 The EIT Honorary Student of the Year is a Zimbabwean student, Algate Panyika Mtemah. Algate, amidst Zimbabwe’s politically complicated year, assisted students with transferring money from Zimbabwe to South Africa to pay for their tuition fees.

And the EIT Student Ambassador of the Year is Tatenda Nherera, a graduate with an Advanced Diploma of Electrical and Instrumentation (E&I) Engineering for Oil and Gas Facilities. He spoke of the benefits of EIT’s distance learning philosophy on all graduates’ engineering careers, and was proud to vouch for its success. He added that EIT’s understanding that students are also working in the field is what sets them apart from other institutions.

The day ended with a lunch and a networking opportunity for the many proud graduates and family members who attended.