A good example of an ordina 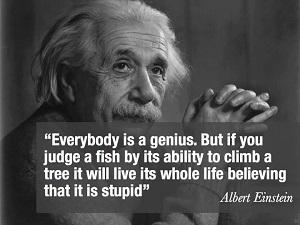 ry person who did well in engineering and in the military is General Dwight Eisenhower (who later became – arguably a good president). He was an average performer in his engineering class at West Point Academy; apparently possessing a fairly average IQ. Although apparently he really enjoyed the typical emphasis of engineering on physics and mathematics. He wasn’t regarded as someone destined for great things. And yet he presided over one of the greatest armadas the world has seen - the D-Day Landings in Normandy, France on the 6th May 1944 to liberate Europe.

He did have three really great qualities though.

He persisted with every task until he had it right. He was dedicated to doing things on time to a high level of quality. He didn’t tolerate poor outcomes but patiently worked to achieve a high quality outcome in everything he did.

Many of us work ferociously hard on often trivial tasks which probably aren’t critical to a great outcome. Eisenhower calmly assessed what were the important things and focussed on achieving great outcomes from them.

As you may recall – the D-Day landings in Normandy depended to a huge extent on good weather This was a huge task transporting an enormous volume of material and men across the English Channel in a very short time. Despite the rain pelting down the night before the landings, he trusted his meteorologist to make the right prediction of good weather for the landings and gave the order to ‘Go’. As it turned out – the weather was fine and his assessment here was spot on. There were many other issues that he could have been distracted by; but he looked at the key elements for success. Eisenhower thus focussed on the key leverage points to make for a great outcome.

Eisenhower never worked with people who were unreliable, ineffective or untrustworthy but always were the best. He trusted these people’s advice and depended on them to do the right thing. He never tolerated poor performers or people who didn’t achieve great outcomes.

The great thing from all of this is that someone fairly average achieved such amazing things in his engineering and military career by focussing on three critical skills. This is certainly inspirational to me and perhaps you.

Erica Jong makes an excellent point: Everyone has talent. What's rare is the courage to follow it to the dark places where it leads.

Thanks for Stephen Ambrose' excellent biography of President Dwight Eisenhower and to the ever thoughtful Dr Philip E. Humbert for his assessment of life skills we need for success.